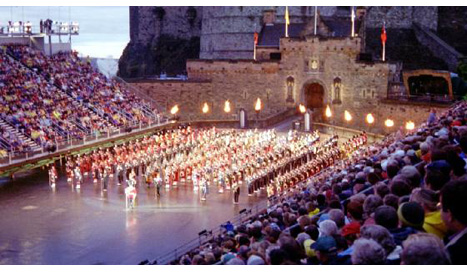 This tailor-made package includes executive coach travel throughout the holiday and from four nights’ accommodation on a half board basis at a 3* or 4* hotel in Scotland to suit your group’s requirements. The content of your preferred itinerary will be discussed with you at the time of enquiry.

Day 1 - The Rheged Discovery Centre is an all weather visitor centre of national importance. Situated in Britain's largest grass covered building, Rheged's centrepiece is a six storey high cinema screen featuring a dramatic journey back in time through 2,000 years of Cumbria's history and mystery.

Day 2 - The Burns National Heritage Park allows a unique encounter with Scotland's most exceptional man. Set among the delightful scenery of historic Alloway it is an unmatched opportunity to experience Scotland's National Poet. Robert Burns' birthplace is brought to life through a mixture of modern technology and unique authentic locations and artefacts. Walk in the footsteps of Tam O'Shanter in 'Alloway's auld haunted kirk' and across auld Brig O'Doon, where Tam's mare, Meg had her narrow escape from the witches. Glasgow - Visits could include the  Cathedral, Provand's Lordship, Glasgow City Chambers, one of the excellent museums or art galleries with examples of the work of Charles Rennie Mackintosh or for the less adventurous you may choose to shop 'til you drop in the elegant West End area of the city.

Day 3 - The Royal Yacht Britannia is permanently moored in Edinburgh's historic port of Leith the Britannia was once home to the world's most famous family. Edinburgh -  Explore the Royal Mile, the Castle or if the Edinburgh Fringe Festival is on (usually the same dates as the Tattoo), you might like to view one of the many performances by varied artists who appear in over 200 venues throughout the city. The Royal Edinburgh Military Tattoo is one of the world's most spectacular shows. It brings together a glittering cast of performers from across the world and showcases a breathtaking array of military and civilian performance steeped in heritage, pride and professionalism. All of this is set against the iconic backdrop of Edinburgh Castle.

Day 4 - Loch Lomond offers mile upon mile of pure clear water, interrupted by a generous sprinkling of verdant islands that appear to float on its silvery surface. It is fringed with gentle rolling pastures and rugged highland peaks that cradle a network of hidden glens and passes.  A Loch cruise with commentary by the skipper, takes in the fjord-like northern unspoilt end of Loch Lomond, the Arklet waterfalls, Rob Roy MacGregor's cave and the Loch Sloy Hydro Electric Scheme. Hear about the clan feuds of the McFarlanes and McGregors and see the extensive lands of the Colquhouns. Keep your eyes peeled for deer and wild mountain goats on the hills, as well as birds of prey in the sky. The Glengoyne Distillery is situated in a wooded valley in the southern Highlands of Scotland. The distillery, which takes its name from 'Glen Guin' or Glen of the Wild Geese, has been producing an exceptional single malt scotch whisky for nearly 200 years.

Day 5 - The World Famous 'Old Blacksmiths Shop' Gretna Green. When couples began eloping to Scotland, the Blacksmith’s shop very quickly became synonymous as a hot bed of scandal and intrigue with many daughters from respectable families choosing to flee here to 'marry a scoundrel'. The 'Anvil Priests' would perform the ceremony for 'a wee dram or a few guineas' depending on your status and financial standing. The hammering of the anvil soon became a notorious sound; romantically it is said that like the metals he forged, the Blacksmith would join couples together in the heat of the moment but bind them for eternity.