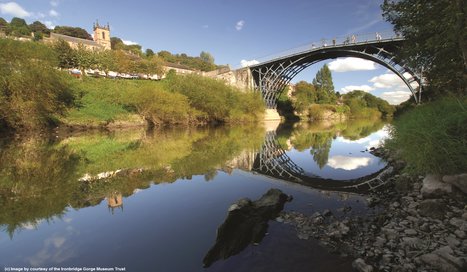 A Group Organiser's Familiarisation Shropshire March 2020
Familiarisation trips always include a busy itinerary and are not designed as a holiday specifically but they are great fun and are an opportunity to meet like-minded Organisers from around the UK. These are promotional & fact finding tours which are open to a variety of Group Organisers, representing many group types.
Please note that there will be walking involved throughout this tour.

·         Applicants will be notified no later than the 10th January if they have been successful.
·         Pick-up points will be determined by where the majority of bookings originate from and may require you to travel at your own cost to join the coach
·         A self-drive option is also available
The Group Organiser price is refundable against a future tour to this region (excludes existing group bookings).
Only one representative from each group will be offered the discounted Organiser price
The partner price* applies to one person only per group.


The 3* Buckatree Hall Hotel Telfordsits at the foot of the famous Wrekin Hill. This is a renowned comfortable country house hotel, with its own mature gardens and set beside a scenic lake and woodland and is a relaxing retreat. Many of the well-appointed bedrooms enjoy scenic views of the lake and garden, providing a memorable setting in which you can relax, unwind and simply enjoy your stay.

Day 1 – Departing your last pick up point this morning around 9am, our journey to Shropshire takes us via the Midlands, where a stop will be made in the City of Coventry. A guided tour of the remarkable Cathedral is included which is said to be the UK’s favourite 20th Century building. A knowledgeable guide will lead you through the history of the Ruins, the Blitz, and the building of the New Cathedral. There are many aspects to the Cathedral aside from its history, including the Architecture and Basil Spence’s vision, the Arts contained within the building and the Artists who created them, and the story of Reconciliation which continues today.
Next we visit the nearby Transport Museum where lunch can be purchased. The last 150 years of Coventry’s history have been shaped in part, by the rise and fall of its motor and cycle industries. In this time, around 475 bicycle and tricycle makers, 161 car manufacturers and 116 motorcycle manufacturers have operated in the city, touching the lives of millions of people. Today, the Coventry Transport Museum traces the paths of these industries through massive social change and momentous world events. It tells the fascinating story of the city, its inhabitants and their phenomenal achievements from the very first bicycles to world record-breaking cars. Departing here later this afternoon we continue on to the Telford area where you will be based for 3 nights. Dinner included tonight.


Day 2 – We start by visiting the county town of Shrewsbury and a 1 hour river Severn cruise with live commentary on the ‘Sabrina’ during which you will be served morning coffee/tea and cake. This cruise will enlighten you regarding the history of the town which was founded by the Saxons and most extensively developed by the Tudors and lies within a giant loop of the river Severn. This town is famed for its castle, spires, abbey, parklands and half-timbered medieval houses. Next we continue on to the historic market town of Ludlow which is surrounded by the unspoilt and beautiful hilly countryside of south Shropshire and the Welsh border country, known as the Welsh Marches. Saturday is one of the town’s market days and the town centre has over 450 listed buildings with its architecture being evidence of the 900 year old Norman planned town’s history. Lunch can be purchased here before this afternoon’s visit to nearby Stokesay Castle, which is quite simply the finest and best preserved fortified medieval manor house in England. Set in peaceful countryside near the Welsh border and the castle, timber-framed gatehouse and parish church form an unforgettably picturesque group. Lawrence of Ludlow, a wealthy local wool-merchant wishing to set up as a country gentleman, bought the property in 1281, when the long Anglo-Welsh wars were ending. So it was safe to raise here one of the first fortified manor houses in England, 'built like a castle' for effect but lit by large domestic-style windows. Extensive tree-ring dating confirms that Lawrence had completed virtually the whole of the still-surviving house by 1291, using the same team of carpenters throughout: more remarkably, the dating also revealed that it has scarcely been altered since.
Returning to the hotel dinner is included.

Day 3 – Today is dedicated to Ironbridge and its museums. We begin with some free time to walk across the world famous Iron Bridge of 1779, from where you may choose to take the short walk alongside the river to the Museum of the Gorge located in the Old Severn Warehouse. See what the Gorge was like in 1796 with the help of a giant 12m long model. Understand more about the area's history and discover why the Gorge was made a World Heritage Site during a short film. Continuing on to Blists Hill where with your included passport ticket, you will meet the Victorians in this recreated Victorian town. Costumed staff will welcome you warmly and you will be given a fascinating insight into how life was lived in Victorian times. Exchange your money in the Bank; admire the goods in the Grocers, Bakery and Sweet shop. Find out about curious remedies in the Chemist and see the printer and candle-maker in action. A visit to the brand new shops on Canal Street is a must. Check out the season’s latest fashions in the General Draper and Outfitters, have a portrait taken in the Photographers, mail your letters and post-cards in the Post Office, select from a massive range of ‘Victorian’ treats in the Sweet Shop and enjoy a delicious portion of traditionally made fish and chips in the Fried Fish Dealers (extra cost for purchases & lunch). Visitors can ride the short distance through the woods on the narrow gauge railway in to the Clay Mine where they will learn more about the vital importance of the mining industries in the Ironbridge Gorge. A fun AV show in the mine features a father and son team telling their experiences as clay miners. The Mine Experience last about 20 minutes and has an additional fee payable locally. We will also visit the Jackfield Tile Museum where you will discover the original gas-lit trade show room, galleries and period room setting, where you will be able to see, touch and even walk on magnificent British tiles. Galleries show exquisite examples of individual tiles and period room settings depict various locations that would have been decorated with tiles. You can walk through an Edwardian Tube Station, a hotel bar, a children's hospital ward and a 1930’s 'front room'. Huge panels depicting medieval stories and nursery rhyme scenes have been rescued from buildings and now grace the walls of the galleries. Returning to the hotel your evening meal is included.


Day 4 - Checking out of the hoteltoday begins with an included visit toRoyal Air Force Museum Cosford. This museum houses one of the largest aviation collections in the United Kingdom, with over 70 historic aircraft displayed in three wartime hangars on an active airfield and the collection spans nearly 80 years of aviation history. Within the museum is the National Cold War Exhibition, which highlights the ideologies of both sides, the social history of the era, the technological achievements which evolved from the competition between East and West and the eventual dissolution of the Warsaw Pact resulting in the world we live in today. Lunch is included here before we continue homeward, returning you to your original departure point.

Simply Groups reserve the right to make minor adjustments to this itinerary due to circumstances beyond our control.