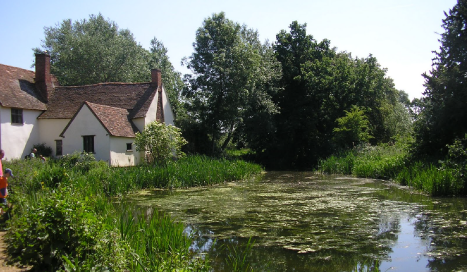 SUFFOLK : A place you can unwind in

Situated on the east coast, Suffolk is a county filled with natural beauty, bordered by 50 miles of glorious coastline and topped with breath taking skies. Its charming villages and medieval towns draw in artists and writers, while its bounty of great produce and restaurants make it a special spot for foodies.  You can visit the Home of Horseracing, explore Constable Country, experience maritime life in Ipswich, immerse yourself in history in Bury St Edmunds, or simply spend long, lazy days by the sea. The fabulous attractions and great days out in Suffolk mean you can do as much as you want, or as little.  In a county as old and varied as this, there are hundreds of Suffolk stories to be told. Discover the tales that can be found in iconic landscapes such as the fields and fens of West Suffolk, the long stretch of coastline in the east, the lush Waveney Valley on the northern border and beautiful Constable Country in the south.

2016 marks the Year of the English Garden: a celebration of rose bushes, hedgerows, apple trees, lush grass and all things horticultural. It also marks 300 years since the birth of ‘England’s greatest gardener, Lancelot ‘Capability’ Brown who designed 170 parks and gardens, many of which still survive today – a handful of them being in Suffolk.
There are few things as quintessentially British as a Suffolk garden in summer. If you enjoy wandering among hedgerows, trees, water features and thousands of flowers, a visit to one of the 14 Suffolk Gardens should be on your itinerary.  These include Ickworth House & Gardens (NT), The Place For Plants, East Bergholt, Glemham Hall, Helminhgam Hall, Melford Hall (NT), Kentwell Hall & Somerleyton Hall & Gardens …. to name just a few.

There are many ‘HIGHLIGHTS’ to ‘EXPERIENCE’ during any visit to Suffolk…… here are just a few.

NEWMARKET RACECOURSES – There has been horseracing in Newmarket since at least the 12th century, making it the oldest known racing venue in post-classical times, and the true home of ‘the sport of kings.’ Watching horses thunder round the track at Newmarket Racecourses is an exhilarating experience, but for a real glimpse into the world of horseracing you can do no better than visiting the Newmarket Gallops on a misty morning and watching the jockeys and horses train in the newly-risen sun.

LAVENHAM – A ‘chocolate-box’ town which offers everything you could want from a place often called the Best Kept Medieval Village in England: half-timbered merchants’ houses, winding streets, a lavish 15th century church, and an embarrassment of listed buildings. If Lavenham’s picturesqueness is not enough to tempt you, it is also well known for its restaurants and for being the home of Harry Potter: Lavenham was used as Godric’s Hollow, the magical village where Harry Potter was born, during filming of The Deathly Hallows Part 1 & Part 2.

HELMINGHAM HALL –This moated manor house is one of many stunning historic estates in Suffolk. Its first bricks were laid in 1490 by John Tollemache and the Tollemache family have owned it ever since. What make Helmingham Hall so remarkable and earn it a place as one of the top sights in Suffolk are its perfectly manicured gardens, designed and cared for by Lady Xa Tollemache, an award-winning garden designer who’s won more than a few medals at the Chelsea Flower Show

CONSTABLE & GAINSBOROUGH – With its dramatic open spaces, varied woodlands, huge skies and picturesque waterways, the scenic Suffolk landscape has always fired the creative heart of artists down the centuries. The most famous of these are those two landscape masters, John Constable and Thomas Gainsborough. Take a look at how the two men were inspired by Suffolk and explore the museum which houses the largest collection of their work outside London.

ABBEYS & CATHEDRAL – Suffolk is home to several famous abbeys including the picturesque ruins at Leiston, where you can actually take part in an ongoing archaeological dig. Then there’s Bury St Edmunds Abbey, where pilgrims once flocked to pray at the shrine of the martyred king, St Edmund, and where in 1214 a group of barons held a secret meeting that led to the signing of the Magna Carta. Lesser known and yet achingly beautiful is Butley Priory, the only remnant of an extensive medieval abbey which is now a private wedding venue but is worth a visit even if you are not getting hitched. St Edmundsbury Cathedral is at the very heart of historic Bury St Edmunds is Suffolk’s only cathedral. Built within the grounds of Bury St Edmunds Abbey, which housed the relics of St Edmund until his shrine was destroyed during the English Reformation, St Edmundsbury Cathedral began life as a small stone church. After centuries of rebuilds and additions, it became a cathedral in 1914, and is best viewed from the spectacular Abbey Gardens adjoining it.

FRAMLINGHAM CASTLE – One look at Framlingham Castle’s tall battlements and it’s easy to see why Mary Tudor chose to gather her troops here before marching on London to claim the throne. Not only is Framlingham’s 12th century fortress one of the top sights in Suffolk, a walk along its precipitous outer walls gives you some of the best views of the county.

SNAPE MARSHES– There are few places in Suffolk more peaceful than Snape Marshes. At this coastal nature reserve you can walk among reed beds so flat that they open up the enormous Suffolk sky above, watch wading birds feed on the mudflats, and smell the salty air blowing in from the sea. If your legs begin to tire you can turn back to Snape Maltings for some lunch or a cup of tea, or if you are keen to keep walking you can follow the River Alde all the way from Snape to Iken and Orfordness.

For more details of the itineraries on offer for groups, contact our dedicated team who will be very happy to assist in putting together for you, the MOST SUITABLE HOLIDAY.