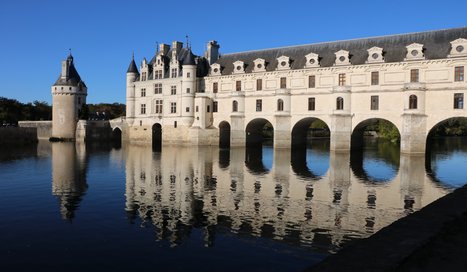 Chateaux and Gardens in the Loire

This tailor-made package includes executive coach travel throughout the holiday and from four nights’ accommodation on a half board basis at a 3* or 4* hotel in the Loire area to suit your group’s requirements. The content of your preferred itinerary will be discussed with you at the time of enquiry.

DAY 1 – Departing your allocated pick up point(s) we travel to the coast for your overnight ferry early evening. Dinner is included in the on board restaurant before retiring for the night in your ensuite cabin.

DAY 2 – LAVAL & FONTEVRAUD ABBEY - A full breakfast is included in the on board restaurant before disembarking in St Malo around 8.15am where we begin the journey to Tours, making a stop enroute at Laval with its medieval old town on the right bank of the Mayenne and dramatic Castle poised above the town on the other side. The heritage of the town has been recognised with its official listing as a ‘ville d'art et histoire’. You will have some free time to explore and purchase an early lunch before continuing on to the stunning UNESCO World Heritage Site of Fontevraud Abbey where a guided tour is included. Arguably the greatest monastic establishment left standing in France, this Abbey was once one of the richest and most powerful royal retreats in the world. Continue to the hotel where dinner is included.

DAY 3 – CHENONCEAU, AMBOISE & CHÂTEAU OF CLOS LUCÉ. Today’s excursions start with a relaxing and included boat cruise around the Chateau de Chenonceau where you will enjoy some of the most picturesque scenery in the region. You will then visit the castle where an audio tour is included. Built on the river Cher, where the unique beauty of its architecture reflects in the water, the Château de Chenonceau is the Val de Loire’s finial. The chateau was built in 1513 by Katherine Briçonnet and saved from the rigours of the French Revolution by Mrs Dupin. Chenonceau is not only remarkable for its architecture and history but also for the fine quality of its collections’ including Renaissance furniture, a vast ensemble of 16th and 17th century tapestries and a large number of masterpieces. The spirit of Chenonceau encompasses the Green Garden, designed by Bernard Palissy, and the Italian maze.
This afternoon we visit Amboise, a delightful little town nestling on the banks of the River Loire where we begin with a visit to the Château of Clos Lucé, famous as the final abode of Leonardo da Vinci. Today it houses the Leonardo da Vinci museum, dedicated to his work and the region’s prestigious history. On display are models of his various innovations as well as a copy of the Mona Lisa. The final visit today is to the Chateau d’Amboise the residence of French kings between the 15th-19th centuries. Numerous literary figures and artists were invited here including Leonardo da Vinci, whose tomb is preserved at the château. From its balconies, its roofs and its terraced gardens, visitors can take in the Loire landscape and delight in what the kings enjoyed. Dinner will be taken in the Amboise area before returning to the hotel.

DAY 4 –TOURS & CHÂTEAU VILLANDRY. After breakfast, we begin with a guided walking tour of the wonderfully preserved historic centre of Tours. The city’s rich and varied history stretches back as far as the Gallo-Roman period, later becoming the medieval capital of France and seat of the French monarchy. There will be some free time for you to explore at your leisure before this afternoon’s visit to the Château & Gardens of Villandry. This isthe last of the great chateaux of the Loire, built during the Renaissance in the Loire Valley. The sober elegance of its architecture combined with the charm of its outstanding gardens make this one of the jewels of world heritage.Returning to the hotel, you will have time to freshen up before this evening’smeal at the Moulin de la Planche Restaurant, which was originally built in the 15th century and is located in nearby Chanceaux sur Choisille.

DAY 5 – CHATEAU RIVAU & GARDENS + CHATEAU DE LANGEAIS - Today begins at the Château + Jardins de Rivau where a guided tour of the castle is included.In the vast rooms of the castle you will see monumental Gothic fireplaces with walls covered with lime wash as seen in Tuscany. In the hall of 'Festin', the biblical story of the 'Feast of Balthazar' is depicted with a Renaissance oil painting style by a Dutch master and on the ceiling, there is a 'fresco' painted by an Italian master which depicts the four seasons of the vine. A special feature is the family collection of trophies and hunting art amongst works of contemporary artists. A light lunch & a glass of Rivau wine is included following the tour, after which you will have a little free time to explore the gardens known as the ‘Remarkable Gardens’ by the Ministry of Culture of France. We finish today at the Château de Langeais where a guided tour is included before enjoying a tasting of wines from the vineyards of La Herpinière, the first wine estate to adopt organic farming in Azay-le-Rideau. There will be a presentation and tasting of the wines from Touraine Azay-le-Rideau before returning to the hotel where dinner is included.

DAY 6 – Leaving Toursafter an early breakfast we journey to Brittany, making comfort breaks en route. Here you will board the mid-afternoon crossing back to Plymouth. A self-service meal is included on board. On arrival in the UK mid-evening, you will be returned to your original departure point late evening.