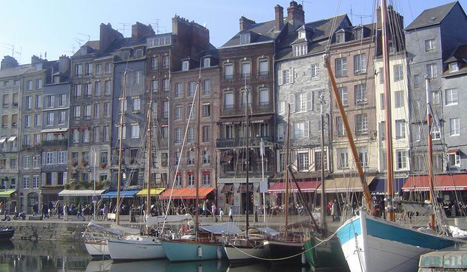 This tailor-made package includes executive coach travel throughout the holiday and from three nights’ accommodation on a half board basis at a 3* or 4* hotel in Normandy to suit your group’s requirements. The content of your preferred itinerary will be discussed with you at the time of enquiry.

Day 1 - Etaples sur Mer is a delighful fishing village with lots of sailing boats. From 1880 to 1914, a colony of artists established themselves in Etaples, drawn here by the incredible light of the Bay of the Canche. This school of artists rivalled those of Barbizon or Honfleur in its importance.

Day 2 - Honfleur is a picturesque port town which is synonymous with some of the world’s most renowned impressionist artists and has attracted artists and art aficionados from all over the world. Honfleur was first mentioned by Richard III in 1027 and is principally a fishing port, but during the 100 years’ war, the town had strategic significance in defending the mouth of the River Seine from attack. The town, whilst still a fishing port, is a wonderful place to spend some time, with narrow scenic cobbled streets as well as some excellent cafes and restaurants. Don’t miss the largest wooden church in France built by shipbuilders and whose roof is identical to a ship’s hull. The City of Caen was founded by William the Conqueror in the 11th century. It attracts visitors from all over the world who come to discover its Romanesque abbeys, its 11th Century castle and its Memorial Museum.Following the terrible bombings of 1944 Caen was able to preserve its magnificent architectural heritage which emerged unscathed from World War II.

Day 3 - Bayeux was the first large town liberated by the allies in Normandy in 1944 and escaped serious damage during WWII. It has many different styles of architecture and until the 11th century, the capital of lower Normandy. Without a doubt, one of the most impressive sites is the cathedral which sits at the heart of this historic town. Bayeux is of course famous for itstapestry, an embroidered cloth over 200 feet long and about 18 inches high, which tells the story of William the Conqueror between the years of 1064 and 1066. A tour of the Normandy Beaches: In 1943 at the Quebec Conference, the decision was taken to attempt a large scale invasion, code-named Overlord, against the continent of Europe in the spring of 1944. However, instead of aiming their operation at the coast of northern France close to Britain, as the Germans had expected, the Allies chose to come ashore in the Bay of the Seine. Landing in lower Normandy, on shores less heavily fortified than those in the Pas de Calais region, it gave the Allies the advantage of surprise. The 360 degree cinema in Arromanches provides a complete overview, with original footage of the “D Day landings”.

Day 4 - Falaise owes its original fame to William the Conqueror, as he was born in the castle in the town in 1027, a fact commemorated by a large statue of him in front of the castle. William went on to conquer England and become king and possession of the castle descended through his heirs until the 13th century when it was captured by King Phillip II of France. The views from the castle across the surrounding landscape. The Chateau du Vendeuvre is one of the most beautiful castles in Normandy. Here you will discover the miniature furniture museum, the first collection in the world. In the chateau experience the lifestyle of the 18th century where you will find original furniture and decoration, including the amazing collection of dog kennels & the kitchens with its secrets. Around the Castle, enter in a paradise and discover different gardens including a utility garden, a topiary garden, a surprise water garden mazes and the exotic garden! A Gala Normandy dinner at the Chateau du Breuil which is classified as a historic monument. It was built in the 16th and 17th centuries and was the dwelling of some of the great families. Today, the "Château du Breuil" is also one of most prestigious Calvados distilleries.

Day 5 - The city of Rouen has been dubbed the "City of a Hundred Spires," as many of its important buildings are churches. Towering above them all is the highest spire in France, erected in 1876, a cast-iron tour-de-force which rises 490ft above the Cathédrale Notre-Dame de Rouen. Claude Monet immortalized Rouen's cathedral facade in his paintings. You will be returned to the UK and your original departure points.