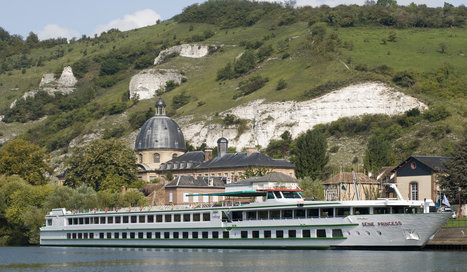 This tailor-made package includes 4 nights accommodation on a full board basis with ‘All Inclusive’ drinks on the 4* MS Seine Princess. The itinerary content and mode of transport of your choice will be discussed at the time of enquiry.

Sample Itinerary
Day 1 - HONFLEUR
Embarkation of this cruise is in Honfleur. Welcome cocktail and presentation of the crew. Dinner included.
Alternatively embarkation in Paris subject to the date of departure and the itinerary in the reverse order.

Day 2 - HONFLEUR - CAUDEBEC-EN-CAUX
A guided walking tour of Honfleur allows you to discover the Saint Catherine Church, the Granaries for storing salt and also the Saint Leonard Church. Enjoy a coach journey along the ‘Côte Fleurie’, where accompanied by your guide, we will stop at Deauville, the most glamourous coastal French city. Discover the casino (exterior view) before re-joining the coach to head for the delightful setting of Breuil Castle, where you willvisit this Calvados distillery and have the chance to taste their local Calvados.

Day 3 - CAUDEBEC-EN-CAUX - ROUEN
A guided tour discovering the ‘Route des Abbayes’. See majestic abbeys which highlight the wealth of the Duchy of Normandy during the Middle-Ages. Begin with a visit of Jumièges Abbey built in 654 when Christianity arrived in the region and was subsequently destroyed by the Vikings. Restored in the 11th century by their descendants, the abbey became extremely well-known, thanks to Victor Hugo who described it as the “most beautiful ruin in all of France”. You will also see the cloisters and the ruins of the Church of Saint Peter before visiting either the Abbey of Saint Wandrille or Wandregisel (exterior only). This is a spiritual location of great importance where the magnificent classical architecture blends with the magnificence of mediaeval heritage. A Guided Walking tour of Rouen or a tour by Petit Train will show the cathedral, the historic districts and the Place du Vieux Marché.

Day 4 - MANTES-LA-JOLIE - CONFLANS-SAINTE-HONORINE - PARIS
Visit the Château de Versailles which has beenon the World Heritage List for thirty years and is one of the finest achievements of French art in the XVIIth century. Louis XIII's former hunting lodge was transformed and enlarged by his son Louis XIV. Until the French Revolution each king embellished this Château in his own style. Visit the King's Grand Apartment. This seven-room enfilade was intended to serve as a Parade Apartment for the sovereign's official business, which is why it was decorated with the most splendid riches and based on the model of Italian palaces of the time. During the daytime, it was open to all who came to see the king. Three evenings a week it was reserved for the Court. Visit the Hall of Mirrors, known in the XVIIth century as the ‘Great Gallery’. Completed in 1687 it is 75m long, 10m wide, 12m high with the light emanating from the large windows which are matched by as many mirrors. The Queen's Apartments are where the Queen received the Ladies of the Court when she rose in the morning and granted private audiences. After visiting the Château, you will still have a little free time to discover the fabulous formal French Gardens created by André Le Notre for LouisXIV. A farewell Gala dinner is included on board this evening.