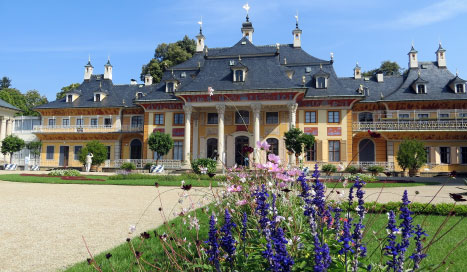 Destination of the Month Saxony

SAXONY is the hidden treasure that is the Cultural Capital of Germany. It is a land of inventors, first class art and culture, world-famous handicrafts and some of the best luxury products in the world. The musical landscape of Saxony is unique in Germany whilst castles, palaces and gardens are integral to the great Saxon heritage. It is also home to historical steam trains, the oldest paddle steamers in Europe and the finest brands of German automobiles. It is also the Motherland of the Reformation.

The Cultural Capital of Germany
The Dresden State Art Collections are among the most prominent museums in the world.  There are 14 State Art Galleries in Dresden which are symbolic as to why and how art was a passion for Saxon rulers! Most of the collections can be found in the Royal Palace, the Dresden Zwinger and the Albertinum. The most outstanding are to be found in the Green Vault Treasury Museum, home of the ‘Court of Aurangzeb’. These include the ‘Dresden Green Diamond’, the Old Masters Picture Gallery where Raphael’s ‘Sistine Madonna’ with the famous little angels can be found and a Porcelain Collection, the best of its kind in the world, with valuable Asian porcelain and masterpieces from Meissen. All of this is thanks to the wealth of the Saxon rulers and their excellent tastes in art. Dresden owes the largest and highest quality collection of ceramics in the world to Augustus the Strong, who adored porcelain and who was responsible for promoting in the 18th century, European hard porcelain which is known today as Meissen Porcelain or Dresden China.

Dresden – Florence on the Elbe
Dresden has recovered and reclaimed its place among the richest cultural and artistic cities in Europe. The unmistakable silhouette of Dresden from the other side of the River Elbe, has over the years  inspired artists, visitors and Dresdeners alike. It is home to wonderful buildings like the Church of Our Lady, the Royal Palace, the Zwinger and the Semper Opera House. Whilst much of the city was shaped during the Baroque period, unlike other cities, Dresden’s beauty does not only come from the old city centre but also from along the banks of the Elbe. This river meanders through stunningly beautiful scenery, where nature and architecture live in perfect harmony. Castles and stately homes line up in the meadows and on the hills, interspersed by gardens, forests and vineyards. A trip on a steamboat from Dresden to Pillnitz Castle, the former summer residence of the Saxon Kings, is a must for every Dresden visitor.

Masters of Classical Music
What would classical music be without the legends who lived and composed in Saxony? The musical landscape of Saxony is second to none in Germany and covers everything from instrument building to fine performances in historic venues. Famous composers including Bach, Schumann, Wagner, Mendelssohn, Kurt Masur, Ludwig Guttler and Carl Maria von Weber created masterpieces in music in Saxony. Johann Sebastian Bach led the St. Thomas Boys Choir in Leipzig who recently celebrated their 800th anniversary. Robert Schumann and Carla Schumann’s house is a museum worth visiting in Zwickau and Saxony has recently inaugurated the Wagner Museum.
Semper Opera, Dresden
The Saxon State Opera House in Dresden, known also as the Semper Opera because of its famous architect, Gottfried Semper, is one of the best opera houses in the world. Most performances are always a ‘sell-out’ because of the superb quality of the ensemble which includes the Saxon State Orchestra.
Saxony – The Land of Inventors
Accidental discoveries or to be more precise, inventions originating from Saxony include the first hard porcelain, Meissen, the first portable typewriter, the first single reflex camera and even coffee filters and beer coasters. It is also home to luxury items including watches made by A. Lange & Söhne.
The Land of Castles, Palaces and Gardens
Countless castles, palaces, parks, gardens and mansions are part of the historical and cultural heritage of Saxony. These frequently form the backdrop for theatre and musical performances, castle festivals, knights' tournaments and exhibitions. Saxony presents European masterpieces of garden art making it a paradise for park and garden connoisseurs.
For the Active Mind and Body
With its diverse landscapes, Saxony offers numerous possibilities to be active outdoors, both in winter and summer. Alongside rivers and in breath taking mountain scenery there is a wealth of adventure for bike trekking enthusiasts, whilst there are also six major cycle routes in Saxony, totaling 1100km in length.
The Saxon Wine Route and Local Breweries
As grapes for wine can only be grown on the sunny southern slopes of the hills along the Elbe River, the vineyards are all connected by the Saxon Wine Route. This runs from the south of Dresden to the north of Meissen and can be visited during a cruise on one of the vintage paddlewheel steamboats of the Saxon Steamboat Company or whilst cycling the Elbe Cycle Route. Wine Festivals are held annually in September in Meissen and Radebeul and there is also the Saxon Wine Museum at the Hoflössnitz Estate, the former Royal Winery in Radebeul.
Motherland of the Reformation
The Protestant Reformation of the early 16th century began as an attempt to reform the Roman Catholic Church. German theologian Martin Luther wrote his Ninety-Five Theses on the sale of indulgences in 1517. 500 years later, there are now approximately 800 million people of the Protestant faith worldwide. Discover the roots of this amazing faith movement, which all started in Saxony.
Oldest Christmas Market
How can it be proved that the first & the oldest Christmas Market in Germany began in Saxony? The ornaments used most commonly at Christmas are all Saxon inventions is proof of this claim to fame.
The famous handcrafted wood products from the Ore Mountains are inextricably linked with the mining history. When mining declined, people began to invent and make wooden products, of which the Christmas items are the best known. The nutcrackers with their grim faces and uniforms stand for the authorities, which the miners had to work for. The smoking men represent their counterparts, the amiable miners who will not let themselves be annoyed by them. The pyramid symbolizes the shaft tower of a mine, while the candle arch represents the entrance to the tunnel of a mine. But the most traditional figurines are the miner and the angel, standing for man and woman and for earth and heaven.