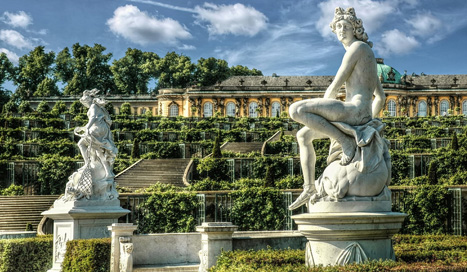 This tailor-made package includes return rail travel from London via Eurostar to Brussels & Continental train service to Berlin. From four nights’ accommodation on a bed & buffet breakfast basis staying at a 3*or 4* hotel in Berlin suit your group’s requirements. The content of your preferred itinerary will be discussed with you at the time of enquiry.

Day 1 - Departing London St Pancras by Eurostar to Brussels. Here you join a continental rail service via Cologne to Berlin, where a coach will then transfer you to your hotel.

Day 2 - A Guided City tour of Berlin will take in sights such as the Reichstag, the Brandenburg Gate, Museum Island, Alexanderplatz, the former Berlin Wall, Checkpoint Charlie and the inside of the Emperor William Memorial Church.

Day 3 - Potsdam - Sanssouci Palace & Cecilienhof Palace. The town of Potsdam is set amidst woodlands and lakes. It has several opulent palaces and gardens including the delightful Sanssouci Palace created in 1744 by Frederick the Great as his summer residence. Visit Cecilienhof Palace built by Emperor William II for his eldest son, Crown Prince William, and his wife. In more recent times it was the venue of the Potsdam Conference between the victorious Allies in 1945.

Day 4 - The Charlottenburg Palace & the Jewish Museum Berlin. A guided tour of the magnificent rooms of the Altes Schloss and the Knobelsdorff Wing of the Charlottenburg Palace. A visit is available to the three world class galleries of The Brohan Museum, The Heinz Bregruen collection and The Scharf- Gerstenberg collection.  On offer is an audio tour of the exhibitions covering two millennia of German Jewish history at the Daniel Libeskind designed, Jewish Museum Berlin.

Day 5 - Museum Island is one of the finest museum complexes in the world. The Pergamon Museum is the internationally renowned ancient history museum containing several wonderful artefacts including the huge Altar of Zeus from Pergamon (2nd century BC) and the famous Ishtar Gate from Babylon. The Alte Nationalgalerie is home to a comprehensive collection of art from between the French Revolution and WWI and features artists such as Caspar David Friedrich, Karl Friedrich Schinkel and Menzel. There are also works by Monet, Renoir, Cézanne and Degas. The Neues Museum has a marvellous Egyptian collection including the exquisite limestone bust of Queen Nefertiti.

Day 6 - Returning by train to Brussels via Cologne where you will travel by Eurostar to London.