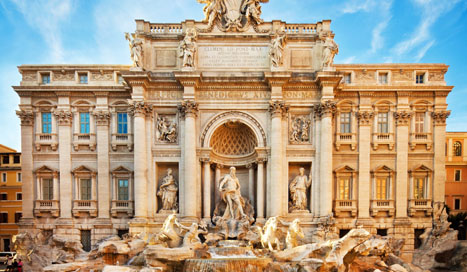 This tailor-made package includes executive coach travel throughout the holiday and from three nights’ accommodation on a half board basis at a 3* or 4* hotel in Rome to suit your group’s requirements. The content of your preferred itinerary will be discussed with you at the time of enquiry.

Day 1 - Arriving in Rome you are met by our local representative and check in at your hotel.

Day 2 - Guided walking tour of Rome -  Including the Colosseum, ancient Rome's most awe-inspiring monument; the Palantine Hill, supposedly where the city of Rome was founded, packed with ancient houses, temples, baths & gardens;  the Via Sacra, the best-known street along which victorious generals and emperors would ride in procession to give thanks to the Capitoline's Temple of Juno; the Arch of Constantine, built by the emperor after which it was named to commemorate the consolidation of his power as sole emperor; the Trevi Fountain, the most famous and arguably the most beautiful fountain in all of Rome.

Day 3 - Guided coach & walking tour of the Vatican City - visit St Peter's, the grandest of the world's churches. View historical and venerated treasures such as a piece of the True Cross, the lance that pierced Christ's side and numerous papal tombs. You will also see Michael Angelo's restored mural of the Last Judgement on the ceiling of the Sistine Chapel and the 4 mighty pillars that support St Peter's magnificent dome. Plus the Vatican Garden, Library & Museum.

Day 4 - Guided tour to Tivoli - Tivoli became the playground of the wealthy, attracting some of Rome’s well-to-do families, who built their country villas here, most of which are quite spectacular. One of these is the Villa d'Este, which has a masterpiece of a classic Italian Garden and which is included in the UNESCO world heritage list. With its impressive mix of fountains, nymphs, grottoes, alternative water features set to music, it is a much copied model for European baroque style gardens.