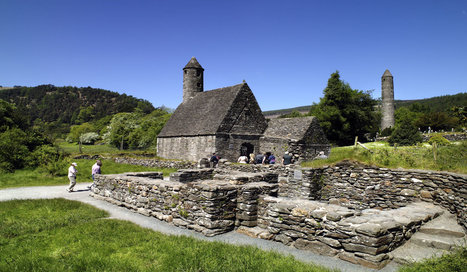 Sample Itinerary
Day 1 – Departing your selected departure point we travel to Holyhead for the ferry crossing to Dublin.
Arriving in Ireland you will be transferred to your hotel where dinner is included.


Day 2 – Today we travel to Kildare to the Japanese Gardens & National Stud. Established in 1946, it combines an active role in the development and promotion of Irish bloodstock whilst also being one of the country's major tourist attractions. The Irish National Stud is a unique outstanding natural beauty that is home to some of the most magnificent horses and sumptuous gardens to be found anywhere in the world. The Japanese Gardens are amongst the finest Japanese Gardens in Europe. The aim was, through trees, plants, flowers, lawns, rocks and water, to symbolise the ‘Life of Man’. Saint Fiachra's Garden seeks to capture that which inspired those involved in Ireland's monastic movement in the 6th and 7th centuries. It does so principally by paying handsome tribute to the Irish landscape in its rawest state. Rock and water are rulers in a garden rejoicing in the natural beauty of woodland, wetland, waterfalls, lakes and streams. The Horse Museum is a state of the art modern exhibition where the Sport of Kings comes to life. In the Sun Chariot Yard, visitors are told the history of the horse in Ireland through artifacts, illustrations and texts while the start of an equine life is presented in an emotional and uplifting video showing the birth of a foal. We then make a stop at the Newbridge Silverware and Museum of Style Icons. The Curragh Plains are not exactly where you would expect to find a hot pink dress worn by Marilyn Monroe, nor Lady Diana’s wedding veils nor the disco ball from Saturday Night Fever. These, as well as Dean Martin’s tuxedo, Elizabeth Taylor’s dresses and many other dazzling celebrity costumes are all on show in this unusual museum. Newbridge Silverware is one of Ireland’s best-known luxury brands. Founded in 1934 as a cutlery manufacturer, this family-run business has evolved to produce a world-famous range of jewellery, gift and tableware, all on gleaming display at this visitor centre. Here you can buy and browse your way through displays showcasing the history and craft behind the sumptuous silverware. Dinner included tonight.


Day 3 - Accompanied by a local guide we travel into the picturesque Wicklow Moutains for an included visit to Glendalough and its visitors’ centre. This is the most celebrated of the valleys in this region and is a combination of outstanding natural beauty and an important early ecclesiastical settlement, which was founded by St. Kevin in the 6th century. Set in a glaciated valley with two lakes, the monastic remains include a superb round tower, stone churches and decorated crosses. The Visitor Centre has an interesting exhibition and an audio-visual show. Departing here, we continue onto the town of Wicklow where we include a visit to the famous ‘Gaol’ which is also known as The Gates of Hell. Built in 1704 and operational until 1924, this impassive stone pile is famous today as the most haunted place in Ireland. The tour here brings to life just what it was like for convicts suffering huge atrocities…beginning with the horrific gaol conditions before reforms were put in place. The 1798 Rebellion and the tragedy of the famine years are vividly depicted, alongside the traumatic impact of the transportation of almost 50,000 Irish people as convicts to Australia. In the early days, all prisoners were incarcerated together here – the sane with the insane, men with women, the tried with the untried. But terrible as it was, during the Great Famine, its promise of regular meals was enough to tempt the starving into petty theft to ensure a place there. Our last visit today is to the Mount Usher Gardens.
These are the horticultural equivalent of a tropical island and once there, you lose all sense of time. The gardens sprawl over 22 acres along the banks of the river Vartry and have been cleverly designed to look like they have always been there. This is the ‘Robinsonian’ style, as adopted by the Walpole family who plotted Mount Usher’s gardens in the late 19th Century. At the time, the vogue for formal, stiff-upper-lipped gardens had waned, to be replaced by natural designs chiming with the wilderness. Dinner included tonight.


Day 4 – Today is dedicated to Dublin where we begin with a guided coach & walking tour of the city after which you will have the rest of the day at your leisure. You may choose to visit Trinity College & the Book of Kells which was written around the year 800 AD and is one of the most beautifully illuminated manuscripts in the world. It contains the four gospels, preceded by prefaces, summaries, and canon tables or concordances of gospel passages. It is written on vellum and contains a Latin text of the Gospels in insular majuscule script accompanied by magnificent and intricate whole pages of decoration with smaller painted decorations appearing throughout the text. You may also choose to visit the Guinness Storehouse where you can indulge in a dramatic story which begins over 250 years ago and ends in the Gravity Bar. Here visitors receive a pint of Guinness whilst relaxing and enjoying spectacular views over Dublin. Dinner is included at the hotel.

Day 5 – Today we begin with a visit to the magnificent Powerscourt House & Gardens which is set in the spectacular surroundings of the Wicklow Mountains. Here, the Avenue leading to the Palladian house echoes the magnificence of the whole estate, being a mile long and lined by over 2,000 beech trees. In addition the 47 acres of gardens are remarkable for their grandeur of scale, at the same time combining great delicacy and refinement of detail. The house was gutted by fire in 1974 but recently has been reborn as an exceptional tourist destination. The gardens at Powerscourt are laid out in two main styles, to the north formal tree plantations frame the vista from the house, while a walled garden, fish pond, cascades, grottos and terraces lay to the south. You might like to visit Powerscourt Waterfall, Ireland's highest at 121m which is surrounded by woods and specimen trees and cascades into the river Dargle. Returning to the ferry port we return to Wales, returning you to your original departure point(s) later today.