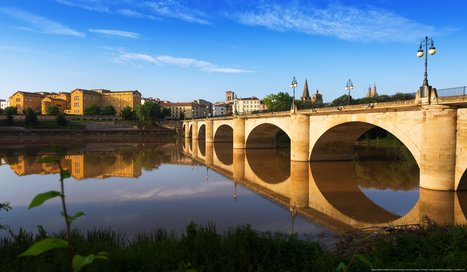 Destination of the Month - La Rioja

In Rioja you will find fabulous wine museums, emblematic wineries, fantastic hotels (some of which are built on wineries), breath taking landscapes, ancient monuments & modern architecture which has contributed greatly in recent times to the reputation of Rioja.

La Rioja in northern Spain, is a land of vineyards and wine, art and culture, and, of course, countryside. This area of Spain has over 500 wineries and is internationally famous for the quality of its wines.
As well as wine tasting, a visit to this region also offers a range of activities which take place in and around the extensive vineyards, including horse-riding, hot-air ballooning & 4x4 routes.
This region is also closely linked to the famous Way of Saint James Pilgrim Route, and has a whole host of cultural attractions.
Here you will find Mediterranean forests along with high mountain landscapes which rapidly give way to semi-arid areas with an almost lunar look. Water accompanies you on many routes as there are seven rivers in this region. There are many ways to discover the countryside of the La Rioja Region amongst which are :

From peaceful walks on specially prepared trails, to adventure sports, activities for young children, biking routes on Vías Verdes there are many alternatives, all with the same idea: To enjoy the countryside of the La Rioja Region to the full.

Apart from its capital, Logroño, you can explore places such as Santo Domingo de la Calzada and its cathedral, San Millán de la Cogolla, The sites of the Suso and Yuso Monasteries which were declared World Heritage Sites by the UNESCO and known for being the birthplace of the first written words in the Spanish language.
Culture and wine together make an unbeatable combination in addition to some amazing natural attractions.

Logroño is a city rich in history and traditions which have been preserved since the Middle Ages.
The Pilgrim's Route to Santiago de Compostela made this one of the most important towns on the route, leaving an interesting monumental legacy closely linked to the traditional passing of the pilgrims.
So much so that the city did not gain importance until the rise in popularity of this route in the beginning of the 11th Century. The river Ebro passes through the city and spanning it are two bridges which are used to connect Logroño with Navarre and Álava. During the festivals to honour Logroño's patron saint, this site is the scene of ceremonies which commemorate the French siege of the city.
To the south of the region you can tour the Route of the Dinosaurs, an itinerary which takes in the tracks left by these prehistoric animals. Another of La Rioja's attractions is its wealth of nature.
The Sierra de Cebollera National Park, in the Los Comeros region bordering on the province of Soria is home to one of the greatest examples of glacial scenery in the peninsula.

Haro is in the Land of wines, vineyards and vegetable gardens. Outstanding in the historic and artistic heritage of this town are the Basilica of Nuestra Señora de Haro, with its Baroque high altar, the Palace of the Counts of Haro, Beldaña Palace which is a good example of Spanish Plateresque dating from the 16th Century and the Santo Tomás Church.
Wine is central to Haro life. It is the driving force of the regional economy and a cultural expression in the area. Vines are an important part of the local landscape and the majority of the vineyards are open for visits and the town also has an excellent wine museum. The most famous local fiesta is the ‘Wine Battle’ held annually on the 29th June. It is a good-natured fight between two sides who throw thousands of litres of wine over their opponents.

Alfaro is washed by the waters of the Ebro and Alhama rivers. Stroll through the centre of the town and discover churches and palaces with centuries of history and witnesses of its ancient splendour, including the 18th Century Abbey and Abbey Palace and the 17th Century masterpiece of San Miguel Collegiate Church. It is also well worth visiting the archaeological site at Eras de San Martín as well as the Ninfeo Romano, a Roman water system with the Cultural Property designation. Alfaro also has a spectacular colony of storks and has the world's largest nests on one single building where more than 400 birds choose the San Miguel Collegiate Church. Watching this number of storks flying through the air is an unforgettable spectacle. If you like going on outings, be sure to explore the Sotos del Ebro Nature Reserve or take a stroll on Mount Yerga. For several days during the annual San Roque Fiestas in mid-August, the town fills with fun and music, parades of ‘giants and big-heads’, bullfights, cultural events and gastronomic competitions, amongst other activities.

Arnedo is located in the Cidacos River valley and is the third largest town in La Rioja and is 48km from Logroño. Although the town has ancient origins, it really began to grow at the beginning of the 20th Century thanks to local shoe production. The importance of this sector in the town is reflected at the Shoe Museum, where you can see tools and utensils used in traditional shoemaking. Nevertheless, the town's long history has also left an interesting artistic heritage amongst which are : The Medieval Castle, Archbishop Argaiz's House/Palace built in 1658, the Palace of the Baroness of Benasque and the Vico Monastery where legend has it, the Virgin Mary appeared to a Moorish leader in 1045.

Ezcaray sits in the Sierra de la Demanda mountains on the banks of the River Oja and both the town and its surrounding area are as ideal for those who seek rest and peace and quiet as they are for those who enjoy mountaineering. In the town centre is the spectacular Church of Santa María la Mayor which was built between the 12th and 14th Centuries and declared an Historic-Artistic Site. Its Aragonese Gothic style is unique in La Rioja. Also of interest is the group of buildings which form the Royal Cloth Factory of Santa Bárbara from the 18th Century and the dyeing house. The area around Ezcaray is made up of striking mountain scenery, with streams, forests and peaks of over 2,000 metres.

Nájera is situated 27km from Logroño and is also on the Pilgrim's Route to Santiago de Compostela, thanks to King Sancho III who in the 11th Century modified the route so that it became a staging post for passing pilgrims. The town is divided by the River Najerilla and an exceptionally important monument stands on its banks, the monastery of Santa María La Real. Built in 1032, it underwent a number of modifications in the 15th Century and its fortress-like external appearance contrasts with the ornamental beauty of the cloister of the Caballeros (knights), so-called because of the great many nobles buried here. In the crypt is the cave, where according to legend the Virgin Mary appeared before King Don García, who ordered the construction of the site. Facing the monastery is the Nájera History and Archaeological Museum, with sections on prehistory, the Romans, the medieval period, ethnography and painting, as well as material from the Nájera region.

RIOJA WINE TOUR: VISIT WINERIES, ENJOY LANDSCAPES & TASTINGS
If you want to understand the concept of Rioja wines you need to visit this famous wine region.
Today there are many concepts of Rioja, of Rioja wines, traditional and new Riojas. Our tours will show you different wineries whilst enjoying stunning landscapes.

HOT AIR BALLOON RIDE OVER THE RIOJA VINEYARDS
Discover a different way to approach the ‘Wine World’ by flying over the vineyards in a Hot Air Balloon. We suggest a flight over Haro the capital of Rioja’s wine and the region close to the river Ebro. This is one of the best areas in Spain to enjoy balloon rides. From the basket you can experience the peace and quiet of flying into the wind whilst admiring the wonderful landscapes of vineyards, wheat fields, trees, towns and small mountains.

EN ROUTE WITH THE DINOSAURS
La Rioja , Soria, Asturias and Teruel are places where you can follow the trail of these formidable Jurassic creatures. In the Region of La Rioja, 72km from Logroño is the village of Enciso which at its centre is the Palaeontological Centre, you can find out details on the 40 sites in the area. These include Valdecillo, one of the most straightforward sites to interpret, Conargo where it looks like the dinosaurs have just passed as the footprints are of such good quality and Era del Peladillo, which is Europe's No.1 and the world's third largest site in terms of number of prints. La Griega beach has some of the largest prints in the world and in Colunga you can visit the Asturias Jurassic Museum (MUJA), which is notable for the unique form of its ichnites.

BE A WINEMAKER FOR A DAY: If you’re not content with being a mere onlooker this might be an option as it will enable you to see how it feels to be a genuine winemaker. You’ll learn how to pick the grapes, prune the vines, remove the leaves, and bottle the fruit in a traditional wine cellar. You can also sign up for an introductory tasting course which will enable you to show off your knowledge of different varieties of wine.

For the more daring : If you like excitement, then La Rioja is your ideal destination. Here you can go rock climbing on 200m high walls in the Najerilla, Iregua, Leza and Cidacos valley canyons; or climb more than 120 peaks, including the Sierra de la Demanda Mountains, the region's highest, with San Lorenzo peak at 2,260m. Otherwise, you can feel all the excitement of caving at any of its 36 caves and potholes; enjoy paragliding or hang-gliding over the San Millán and Leza Valleys or in the Ezcaray area; you can explore tracks and forest trails by mountain bike, with stunning routes like those in the Oja Valley; Canoe down the white waters of the Iregua and Najerilla rivers or go canyoning along the gorge of the San Martín and Peña Muro stream or the Jubera river.

For all kinds of people : Mountain boots and clothing, water bottle, hat, rucksack and, above all, a desire to experience the countryside. In La Rioja you will find many easy, signposted routes with good access. Trails in the Obarenes Mountains are dominated by vineyards or explore alongside pine woods, lakes with icy water and the waterfalls in the Picos de Urbión Mountains. In the Sierra de Cebollera Nature Reserve, just 50km from Logroño you can explore by way of a network of tracks and trails.

Bird watching : Did you know that Europe's largest colony of white storks can be found in Alfaro? This is one of the surprises awaiting you at the Sotos del Ebro Nature Reserve where you can also see herons, blackbirds and kingfishers. Less than 50km away, Arnedillo awaits you in the heart of the Rioja Baja Valleys. This area has a UNESCO Biosphere Reserve designation where Griffon vultures can be seen in flight and up close at the Vulture Viewpoint. These carrion-feeding birds, along with other birds of prey including eagles and different protected species, inhabit other mountain ranges in La Rioja, such as the La Demanda, Urbión, Iregua, Leza, Jubera and Obarenes Mountains.

For your tailor-made package contact our expert group sales team who will be able to suggest a suitable group holiday package based on your specific requirements.