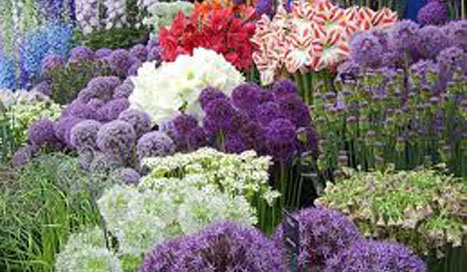 This tailor-made package includes executive coach travel throughout the holiday and from two nights’ accommodation on a half board basis at a 3* or 4* hotel to suit your group’s requirements. The content of your preferred itinerary will be discussed with you at the time of enquiry.

Day 1 - Baddesley Clinton NT is a picturesque medieval moated manor house and garden. This atmospheric house dates from the 15th century and was the home of the Ferrers family for 500 years. The house and interiors reflect its heyday in the Elizabethan era, when it was a haven for persecuted Catholics - there are three priest's holes. There is a delightful garden with stewponds and a romantic lake and nature walk.

Day 2 - The RHS Malvern Spring Gardening Show has something for gardeners of all levels. Pick up new ideas at the Plants & People Theatre, with talks and Q&A sessions with experts and gardening celebrities. The Allotment Theatre features demonstrations to help you grow your own, & you can see a garden being constructed at the Landscaping Live feature. Browse and buy plants and gardening products; enter the Malvern Floral Marquee and prepare to be wowed! As you walk in you will be greeted with an array of scents and riotous colours. Worcester -  A visit to the stunning Guildhall  and its painted assembly rooms and sparkling chandeliers., Wonder at the craftsmanship of the master masons who built the Norman crypt of the Cathedral and their equally gifted successors, who gave us the building which today dominates the riverside and can be seen from miles around.

Day 3 - Ledbury is a market town with a timeless, unhurried quality about it. Rich in history it existed as an early Saxon settlement and has excellent examples of Norman, Tudor, Georgian and Victorian architecture. Standing on its 16 pillars in the heart of town, Ledbury's superb Market House is probably the best example of its kind in England. This grade 1 listed building, built in 1617, was originally used for the storage of grain, wool and hops. Its build has been attributed to the king's carpenter, John Abel. Gloucester owes its name, strategic location and much of its layout to many centuries of Roman occupation. The first settlement was a military fortress established in the late 40’s or early 50’s AD and was granted the title of Colonia Nervia Glevensis by Emperor Nerva – the highest status a provincial town could achieve in the Roman Empire. During the reign of Edward the Confessor, Gloucester was one of the three most important cities in England the others were London and Winchester , with the king meeting the Great Council here on an annual basis. Key sights in the city include Gloucester Cathedral, one of the finest medieval buildings in the country and the burial place of royalty and Gloucester Docks.The historic Victorian docks are a unique and inspiring destination, described by Charles Dickens himself as ‘extraordinary’, and granted port status by Queen Elizabeth I in 1580. Gloucester is the most inland port in Britain, and the docks are dominated by towering warehouses which stand proud along the water’s edge. At the Waterways Museum you can see skilled shipwrights and riggers repairing, restoring and building traditional ships and rigging all year round in Tommi Nielsen’s dry dock on the West Quay. On the quayside you will find boats from the UK's Historic Boat Collection including colourful narrow boats and an iconic steam dredger. A river cruise can be included during your time here.