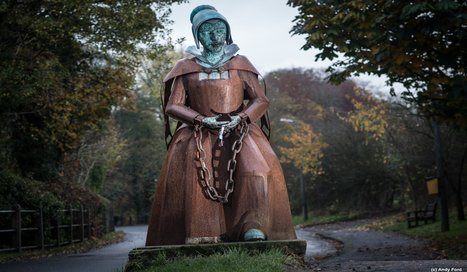 This tailor-made package includes executive coach travel throughout the holiday and from three nights’ accommodation on a half board basis at a 3* or 4* hotel in the Lancashire OR Manchester areas, to suit your group’s requirements. The content of your preferred itinerary will be discussed with you at the time of enquiry.

Day 1 - The Shugborough Estate (NT) is the ancestral home of the Earls of Lichfield. With rumoured connections to the Holy Grail, the 364-hectare classical landscape is peppered with unusual monuments. The fine Georgian mansion house, with magnificent views over riverside garden terraces, features stunning collections of porcelain. Costumed characters work in the servants' quarters and farmstead: doing laundry, cheese-making, milling, brewing and baking. In addition, the restored walled garden grows historic varieties of fruit and vegetables.

Day 2 – Today begins with a fascinating morning coach tour around Pendle Witch Country. This is not just about the story of the Pendle Witches but it also takes you around the wild countryside of Pendle Hill. Experience the beauty of this unknown area of Lancashire, the countryside of which has changed little since the 1600’s. This tour has castles, battlefields, abbeys, ancient churches, witches, graves and stories of famous men and women who lived here, including the man who invented time as we know it. See for yourself what Queen Mary, in the early part of the 20th century called, ‘the finest view in England’. This tour finishes at Pendle Village Mill in Nelson where lunch can be purchased and a little free time can be allowed for some ‘mill-style’ retail therapy. Today concludes with an included 30 minute steam train journey from Rawtenstall to Bury on board the East Lancashire Railway, an experience which will take you back in time to an earlier British Rail era.

Day 3 – Salford and the Quays area and a guided tour of BBC Media City, where you will walk in the footsteps of some of your favourite celebrities. The well-informed Tour Producers will entertain and surprise you and will make sure that you see the most interesting areas available on the day of your visit, as well as giving you a fascinating insight into how TV and radio work. The Imperial War Museum North is housed in a stunning building designed by world-famous architect Daniel Libeskind and exposes the peerless collection of the Imperial War Museum to the people of the North-West. The Lowry Art Centre portrays Lowry’s unique style and personal vision which set him apart from the major art movements of his time. The Lowry Collection includes over 400 paintings and drawings, alongside important loans from public and private collections around the UK. The Lowry Outlet Mall is an ideal destination for group travel where you can enjoy shopping for bargains at over 80 outlet stores. Gawthorpe Hall (NT). Affectionately referred to as the ‘Downton of the North’, Gawthorpe Hall was redesigned in the 1850’s by Sir Charles Barry, designer of the Houses of Parliament and the ‘real’ Downton Abbey, Highclere Castle. The modest Hall houses the North West’s largest collection of portraits on loan from the National Portrait Gallery as well as The Gawthorpe Textiles Collection, a wonderful collection of intricate lace, embroidery and needlework amassed by Miss Rachel Kay-Shuttleworth. Gawthorpe Hall is the final stop on ‘The Brontë Way’, a long distance route with strong associations with the writings of Charlotte Brontë.

Day 4 - Our first visit today will be to Quarry Bank (NT), one of Britain's greatest industrial heritage sites. The early Industrial Revolution changed our world forever and here you can discover a complete industrial community and experience the very different worlds of owner and worker, who lived and worked here side by side. In 1784, monumental change was brought to the village of Styal when Samuel Greg established his cotton mill. Powered by the water of the river Bollin and the toil of the workers, the Greg family business was part of a turning point in our history. The gardens offer stunning views and spectacular changes through the seasons. In the restored glasshouse and kitchen garden, you can see the array of exotic fruits and vegetables that were grown for the wealthy Gregs' table. By contrast, the Apprentice House steps into the lives of the pauper children who worked in the mill. Children as young as eight years old were apprenticed at Quarry Bank, working 10 hour days in the mill and living cramped together under the control of the Apprentice House superintendents. Later this morning we continue on to Tatton Park (NT).This early 19th Century Wyatt house sits amid a landscape 400-hectare deer-park and is opulently decorated, and provides a fine setting for the Egerton family’s collections of pictures, books, china, glass and specially commissioned Gillows furniture. The theme of Victorian grandeur extends into the garden, with its Fernery, Orangery, Rose Garden, Tower Garden, Pinetum, Walled Garden with glasshouses, Italian garden and a Japanese garden (viewed from its perimeter). Other features include a 1930s working rare-breeds farm. There is a restaurant and new garden tea-room where you will be able to purchase lunch.

Day 5 - Jodrell Bank is home to the giant Lovell Telescope which has been a familiar feature of the Cheshire landscape and an internationally renowned landmark in the world of astronomy for over 50 years. Since the summer of 1957, this telescope has been quietly probing the depths of space, a symbol of our wish to understand the universe in which we live. Even now, it remains one of the biggest and most powerful radio telescopes in the world, spending most of its time investigating cosmic phenomena. Bridgemere Nursery & Garden World is Britain's largest and most spectacular garden centre. Established fifty years ago by John Ravenscroft as a one-man band rose nursery; Bridgemere now covers 50 acres and is one of the largest garden centres in the world. The nursery grows nearly a million plants a year and has six acres of themed, award-winning show gardens.