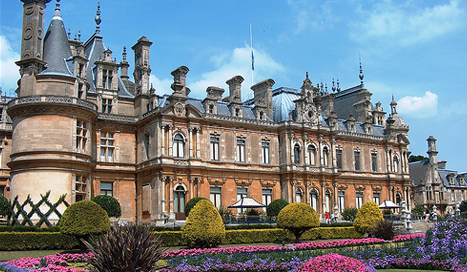 This tailor-made package includes executive coach travel throughout the holiday and from three nights’ accommodation on a half board basis at a 3* or 4* hotel to suit your group’s requirements. The content of your preferred itinerary will be discussed with you at the time of enquiry.

Day 1 - Waddesdon Manor (NT) which was built (1874-89) by Baron Ferdinand de Rothschild to entertain his guests and display his vast collection of 18th-century French decorative arts. The furniture, Savonnerie carpets and Sèvres porcelain rank in importance with those in the Louvre in Paris and the Royal and Wallace Collections in London. There is also a fine collection of portraits by Gainsborough and Reynolds, and works by Dutch and Flemish Masters of the 17th century. The Victorian gardens are considered one of the finest in Britain and famous for the parterre, seasonal displays, shady walks and views, fountains and statuary.

Day 2 - Bletchley Park is thehome of the famous Enigma Machines, including the rare 'Abwehr G312', which is undoubtedly a highlight of a busy day out here. But, there is much more than machines in a visit to the historic site. Upon arrival you will be greeted by the customer service team and your guide for the day. After tea and coffee, your tour commences around the outside of the wartime buildings in the grounds of Bletchley Park, where visitors are given a detailed history of the site and its code-breaking activities. You will discover what went on at each of the key locations, including the famous code-breaking huts, and there will also be a chance to see the Polish Memorial in the stable yard. A sandwich buffet lunch is included before the second half of the tour resumes. A visit it to the Block B museum tells the complete Bletchley Park story. It houses the Abwehr Enigma machine, Lorenz machine, Bombe Rebuild, Alan Turing statue, World War Two Aviation display, Home Front Exhibition, Toy Collection, Milton Keynes Amateur Radio Society, Ox & Bucks Light Infantry at Pegasus Bridge display, and a German Signals Group. The tour will also include a visit to the Colossus Rebuild, the first semi-programmable electronic computer. There is also a wartime mini cinema and an outstanding Churchill collection. The Victorian Mansion was the headquarters to intelligence staff during the War.

Day 3 - Woodstock is a fine Georgian town with a distinct Royal heritage, containing many attractive period buildings: the 18th century Town Hall; the Church of St Mary Magdalene with its Norman doorway, early English windows and a musical clock, which plays tunes hourly. Blenheim Palace is considered to be one of the finest baroque houses in the country. It was a gift from Queen Anne and a grateful nation to John Churchill, 1st Duke of Marlborough, in recognition of his famous victory over the French at the Battle of Blenheim in 1704. It is now the home of the 11th Duke of Marlborough and is lived in and cared for by the family for whom it was built.

Day 4  - Oxford - the historic ‘city of Spires’. The Bodleian Library & Divinity School (as featured in the ‘Harry Potter’ films) is one of the world’s most famous libraries, which is said to be the most beautiful room in Europe. The Divinity School was built in 1488 for the teaching of theology. With its elaborately vaulted ceiling and its 455 carved bosses, it is a masterpiece of English Gothic architecture. The 17th century Convocation House and Court, where Parliament was held in the Civil War. Duke Humfrey's mediaeval library, still in use today, is where generations of famous scholars have studied through the ages. These former readers or users of the Library include five kings, 40 Nobel Prize winners, 25 British Prime Ministers and writers such as Oscar Wilde, C S Lewis and J R Tolkien. A tour here shows you the interior of the buildings which form the historic heart of the University. Waterperry Gardens consists of eight acres of landscaped ornamental gardens which have inspired and delighted countless gardeners for more than seventy five years. It is the perfect place for inspiration for both complete novices and the more experienced gardener, and there're design ideas by the bucketful. The gardens include both formal and rose gardens, a river walk, lily canal and classical herbaceous border, along with an alpine garden and the National Collection of Kabschia Saxifrages.

Day 5 - The Didcot Railway Centre is a unique collection of Great Western Railway steam engines, coaches, wagons, buildings and small relics; and a recreation of Brunel's broad gauge railway. It is located in a rural setting based around the original 1930’s engine shed.