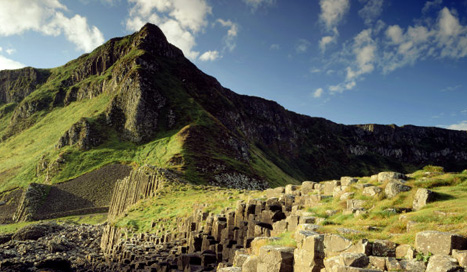 Day 1– Travelling to Cairnryan where you will board the fast ferry crossing to Belfast. Transfer to the hotel for your evening meal.

Day 2– Joined by your local guide this morning is dedicated to a guided city tour predominantly by coach, which willtake in many highlights and places of interest. Belfast dates back to the early 17th Century and is Northern Ireland’s largest and the island of Ireland’s second largest, city. The name ‘Belfast’ comes from the Gaelic ‘Beal Feirste’ (mouth of the sandy ford). Belfast grew up around its cottage industries which were situated in ‘locales’ or ‘quarters’. There are still four quarters in Belfast today, each rich in history and culture. Notable city landmarks include City Hall, the Grand Opera House, the Botanic Gardens and Queens University. You will also see some of the many murals which relate events from an historical perspective. The tour will conclude at the atmospheric Crown Bar (NT) where refreshments can be purchased. With its period gas lighting, cosy snugs, ornate interior of brightly coloured tiles, carvings and glass, this is an ideal location to take a break before this afternoon’s included visit to the Titanic Belfast. This attraction is housed in an iconic six-floor building in the heart of Belfast, right beside the historic site of this world-famous ship’s construction. The Titanic experience takes you through nine galleries, telling the story of RMS Titanic from her conception in Belfast in the early 1900’s, through her construction and launch, to her famous maiden voyage and tragic end. The galleries are innovative and interactive with many features including diving to the depth of the ocean to explore where RMS Titanic now rests. The Titanic story is told at Titanic Belfast in a fresh and insightful way. To complete your visit, your Titanic ticket also includes the SS Nomadic which is berthed next to Titanic Belfast in the historic Hamilton Dry Dock. She was the tender to RMS Titanic and the last remaining White Star Line ship in the world. Restored to her original 1911 glory, a visit to SS Nomadic combines the authentic heritage and atmosphere of this historic ship with the intriguing stories of her passengers and the ups and downs of her dramatic career. Returning to the hotel your evening meal is included.

Day 3 – Departing the hotel at 8.30am accompanied by your local guide, we head north via the scenic Antrim coastal route to the northern most part of N. Ireland. Travelling via the picturesque village of Carnlough and through the equally stunning villages of Cushendall, Glenariff and Cushendun, comfort break(s) will be made during the journey. Arriving at Bushmills Distillery a guided tour is included after whichyou will be able to purchase lunch and visit the gift shop or take a trip to the bar for a swift taster of the famous tipple, Irish whiskey!
Suitably refreshed our next visit is possibly the highlight of the day, the famous Giant’s Causeway (NT), a World Heritage Site. Rising and blending into the landscape, the Visitor Centre with walls of glass, basalt columns and a state of the art interior, is truly innovative. The energy efficient building boasts a number of exhibition areas and a grass roof with 360 degree views of the Causeway coastline. This is where the science and the stories come to life. Flanked by the wild North Atlantic Ocean and a landscape of dramatic cliffs, for centuries the Giant’s Causeway has inspired artists, stirred scientific debate and captured the imagination of all who see it. Is it the handiwork of legendary giant Finn McCool or the result of volcanic fury millions of years ago? Dinner included at the hotel.


Day 4 - Today we begin by visiting Hillsborough Castle & Gardens, the official Northern Ireland residence of HM The Queen. This late Georgian mansion was built in the 1770’s by Wills Hill, first Marquis of Downshire and was later re-modelled in the 19th and early 20th centuries. Today, it is a working royal palace functioning as the official residence of the Royal Family when they are in Northern Ireland, and it has been the home of the Secretary of State since the 1970’s. During your included guided tour of the house you will see elegant State Rooms which are still in use today and the majestic Throne Room and graceful Drawing Room. Visit the palace’s Downshire Gallery to see portrait photography of the people, great and small, who have visited Hillsborough, from queens to choir boys, politicians to pot washers. Afterwards, you might choose to wander through some of the 96 acres of beautiful gardens developed from the 1760’s onwards, offering a contrast of ornamental grounds, peaceful woodland, meandering waterways, and trimmed lawns. Look out for the statue of Ossian outside the main entrance, the Lady Alice Temple, the Quaker Burial ground and the Ice House.
We then continue on to Downpatrick where at The Saint Patrick Centre a light lunch is included on arrival. This is the only permanent exhibition in the World about Ireland’s Patron Saint. The story of Ireland begins in the words of Patrick- the Roman, the Slave, the Cleric and Saint and a video explains Patrick’s life and the major impact of Irish Missionaries, a legacy which lasts to this day. It is then just a short journey to Strangford where we take the Strangford Lough ferry (20 minute journey) to Portaferry and onwards to Mount Stewart (NT), one of the most inspiring and unusual gardens in the National Trust's ownership. The garden here reflects a rich tapestry of design and great planting artistry that was the hallmark of Edith, Lady Londonderry. The mild climate of Strangford Lough allows astonishing levels of planting experimentation. The formal areas exude a strong Mediterranean feel and resemble an Italian villa landscape; the wooded areas support a range of plants from all corners of the world, ensuring something to see whatever the season. The house has now re-opened after a 3 year restoration project. The elegance and charm of the house has been returned to as it was when the home of the 7th Marchioness Edith, Lady Londonderry and her family in the early 20th Century. Returning to the hotel dinner is included.


Day 5 - A leisurely breakfast this morning before departing on the short transfer to the port for the 2.5 hour ferry crossing to Cairnryan. Retracing our steps homeward with comfort breaks, you will be returned to your original departure point(s).