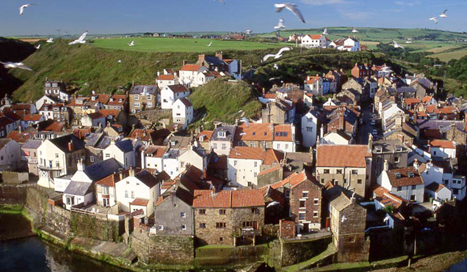 This tailor-made package includes executive coach travel throughout the holiday and from three nights’ accommodation on a half board basis at a 3* or 4* hotel in Yorkshires to suit your group’s requirements. The content of your preferred itinerary will be discussed with you at the time of enquiry.

Day 1 - Hardwick Hall (NT) is theremodeled family home of Bess of Hardwick, one of the richest and most remarkable women of Elizabethan England and stands beside the New Hall which she raised later in the 1590’s. Though the Old Hall is now roofless, visitors can still ascend four floors to view surviving decorative plasterwork, as well as the kitchen and service rooms. A recently installed exhibition in the West Lodge describes Bess's adventures in architecture, and how she transformed her birthplace from a medieval manor house into a luxurious Elizabethan mansion.

Day 2 - Pickering and the North York Moors Railway for your journey by steam train,to the village of Goathland, better known as 'Aidensfield' in the TV programme Heartbeat.  Experience the thrill of a steam locomotive on a nostalgic journey through spectacular countryside. Continuing by coach to the seaside resort of Whitby whose skyline is dominated by the ruins of St. Hilda's Abbey situated high on Whitby's East Cliff.  Spreading below, Whitby, a maze of alleyways and narrow streets run down to the busy quayside. From the old town of Whitby, 199 steps lead up to the parish church of St. Mary, whose churchyard on Whitby's East Cliff gave Bram Stoker the inspiration to write his world famous book, Dracula. The 18th century explorer Captain James Cook originates from Whitby. Having a unique old world charm,  for centuries Whitby has provided a safe haven for shipping and fishing fleets and was once the main whaling port for the North of England. Take a short cruise on the 'Old Whitby Lifeboat', the Mary Ann Hepworth' which was one of the longest serving lifeboats in the R.N.L.I. fleet or enjoy a sentimental tour of Whitby on the Old Glory Steam Bus Elizabeth which is Whitby's and possibly the country's only Steam powered Bus. There is also a full scale replica of Capt. J Cook’s ship, The Endeavour, which was originally a merchant collier, launched in June 1764 from this coal and whaling port. She was ship-rigged and sturdily built with a broad, flat bow, a square stern and a long box-like body with a deep hold.

Day 3 - Today is a leisurely day in and around Scarborough, England’s oldest holiday resort. Scarborough offers visitors wonderful fresh bracing air from the North Sea, an interesting and busy harbour, two beautiful clean and safe sandy beaches, an historic castle, superb walks and cliff top scenery, as well as traditional sea side attractions. The popularity of Scarborough as a Spa began in the early 1600’s, when it is reputed a Mrs. Farrow discovered a stream of mineral water flowing from a cliff to the south of the town. News quickly spread about the benefits of drinking this water, the aristocracy and even Royalty came to Scarborough on annual visits to recuperate from their unhealthy lifestyle. The more adventurous visitors took to sea bathing, which became a fashionable pastime. Bathing machines were invented to protect the modesty of female bathers at a time before ‘mixed bathing’ was acceptable. Below the Castle is the Church of St Mary, dating from the 12th century and its grave yard is the final resting place of author Anne Bronte, who died while visiting Scarborough in 1849. The harbour is full of interest, with fishing vessels and yachts and the bay is backed by the Valley gardens and South Cliff gardens and a fine esplanade.

Day 4  - Today we visit RAF Holmpton for an included Bunker Tour. Behind the massive blast doors, the vast Nuclear Bunker extends almost 100ft below ground and covers nearly 35,000 square feet. This Award Winning fully guided tour visits 3 Operations Rooms - Engineering and Plant - COMCEN/Radio Room and Telephone Exchange - Dormitories and Offices - Situation and Briefing Rooms - Message Centre - Coding and Computer Rooms - Kitchen and Officers Mess - Canteen and Hospital. Along with the WMD Gallery & many other areas, these are all brought to life with films/shows and demonstrations. Originally built in the 1950's as an Early Warning Radar Station, it was refurbished in the 1980's as the RAF Support Command War HQ. It was then rebuilt in the 1990's a an Experimental Electronic Warfare operations centre and there is over 60 years RAF History at Holmpton, which is still today a working environment. The seaside town of Withernsea is home to the Withernsea Lighthouse, which is one of only a handful of lighthouses built inland, standing 127 feet high in the middle of the seaside town. The base of the lighthouse features RNLI and HM Coastguard exhibits, displays and old photographs. On a clear day you can even see the towers of the Humber Bridge. The port town of Hull where we will visit the unique Museum Quarter, where you can journey back 235 million years to encounter sea monsters, Romans and a life-sized woolly mammoth. The Streetlife Museum of Transport brings history to life with all the sights, sounds and smells of the past with its authentic scenes which invite you to climb on, get in and explore. Visit the birthplace of William Wilberforce and find out about the transatlantic slave trade in Wilberforce House, plus experience the hazardous life of deep-sea fishing abroad the city's last sidewinder trawler, the Arctic Corsair.

Day 5 - The city of York for a little free timebefore visiting the Rising Sun Pub in West Yorkshire, where you will be given an entertaining and unique talk by Tom Dixon on the heyday of the Liquorice Industry followed by a 2 course Rhubarb themed lunch.